The Silicon quantum electronics workshop held near Sherbrooke, QC, was a great meeting with many impressive results in the area of silicon spin qubits. Bohdan presented his talk on simulating small QI processors and a novel method of pulse design. 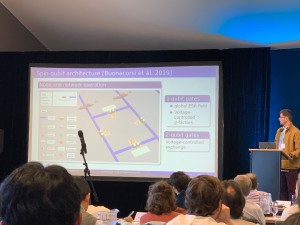 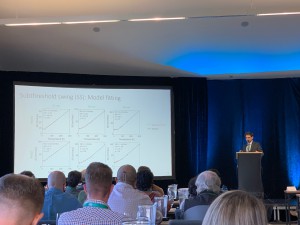 Both talks were well received, and led to further discussions. 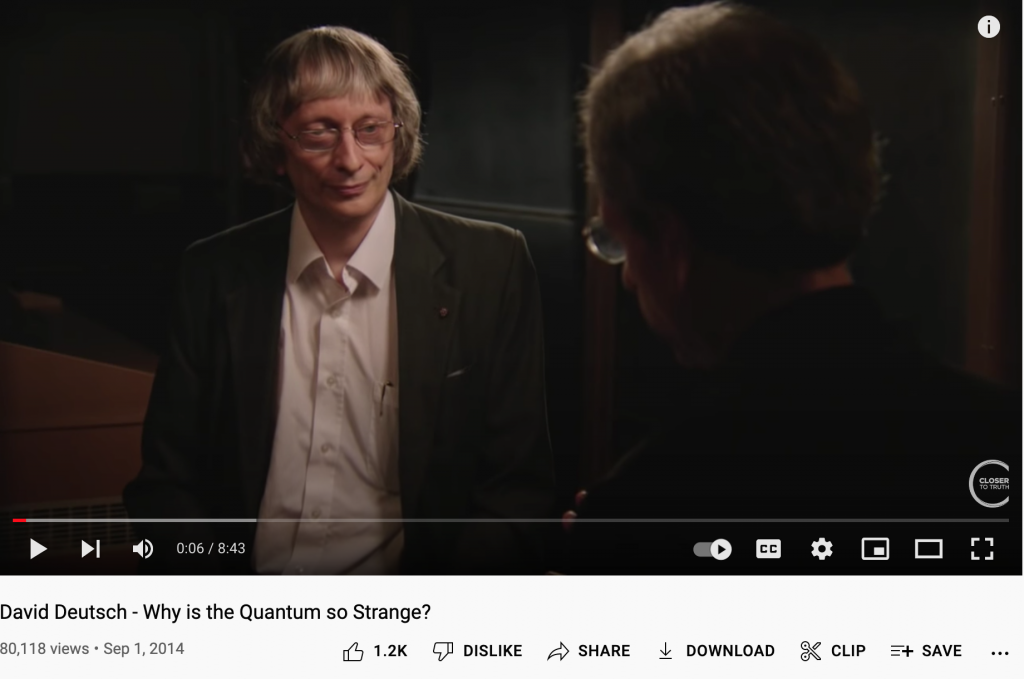 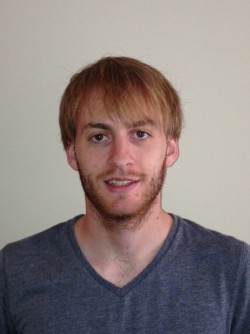 Sean successfully defended his PhD thesis, entitled “Scanning tunneling microscopy of electrically driven phase transitions in a charge density wave material” on March 3, 2022. His PhD is in Chemistry with a Quantum Information specialization.

Here is an animation based on our 2019 paper “Network architecture for a topological quantum computer in silicon”. 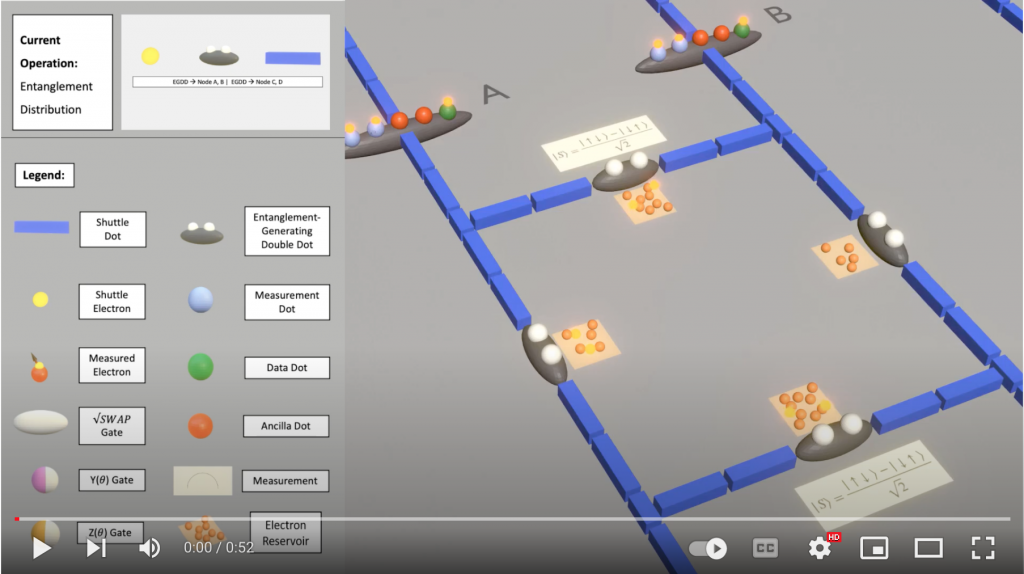 First, an entangled state of two spins is created by loading the electrons into the same dot, which leads to a spin singlet state via the Pauli exclusion principle. The electrons are then separated and shuttled to different nodes, thereby providing entanglement between the nodes.

After two entanglement distribution steps, a set of local operations is carried out on each node. First we form an entangled state of 4 qubits (spread over the 4 nodes); this is called a Greenberger-Horne-Zeilinger (GHZ) state, and is a key resource for the error correcting “surface code”.

Next, we perform conditional quantum logic operations between the “data” qubit in green, and the neighbouring ancilla qubit in red. Measuring the ancilla qubit on all four nodes tells us if an error has occurred or not, and provides information about the type of error so that it can be coherently corrected.

This animation provides a snapshot of what the operations would look like on a single 4-node “cell”. A large-scale quantum processor would consist of a 2D array of thousands or millions of such cells, all operating in parallel.

Congrats to Bohdan and Alex

Congratulations to Bohdan Khromets and Alex Currie for both successfully defending their MSc theses during the Fall 2021 term!

UPDATE: this paper is now published in Applied Physics Letters!

A preprint describing our recent work on single electron pumps in dopant-free GaAs 2D electron gases is now available on the arxiv. Here is the abstract:

We have realized quantized charge pumping using non-adiabatic single-electron pumps in dopant-free GaAs two-dimensional electron gases (2DEGs). The dopant-free III-V platform allows for ambipolar devices, such as p-i-n junctions, that could be combined with such pumps to form electrically-driven single photon sources. Our pumps operate at up to 0.95 GHz and achieve remarkable performance considering the relaxed experimental conditions: one-gate pumping in zero magnetic field and temperatures up to 5K, driven by a simple RF sine waveform. Fitting to a universal decay cascade model yields values for the figure of merit δ that compare favorably to reported modulation-doped GaAs pumps operating under similar conditions. The devices reported here are already suitable for optoelectronics applications, and with further improvement could offer a route to a current standard that does not require sub-Kelvin temperatures and high magnetic fields. 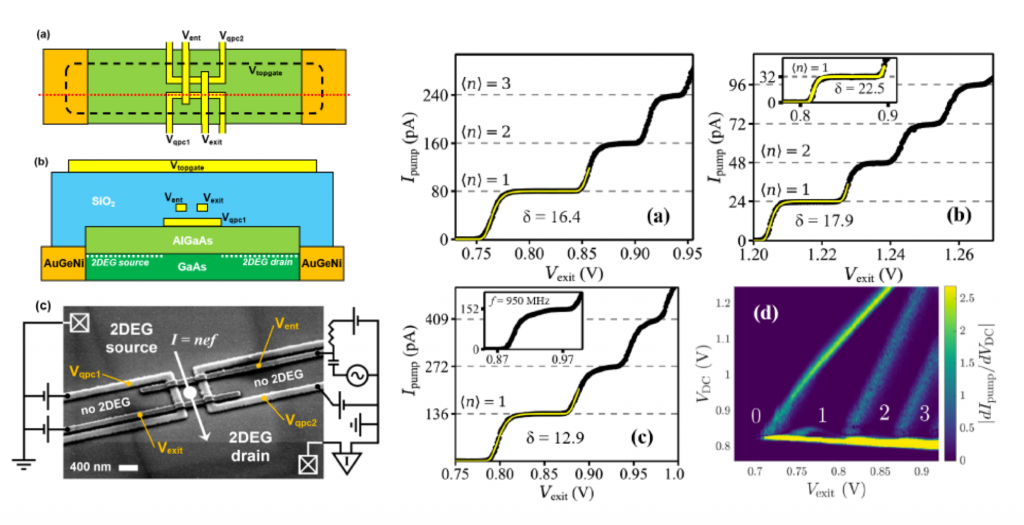 “Roadmap on quantum nanotechnologies” is published

Prof. Baugh served as editor and co-author for the article “Roadmap on quantum nanotechnologies“, newly published by IOP Nanotechnology. Baugh, together with co-editor Dr. Arne Laucht (UNSW), conceived of the roadmap and invited nearly 30 expert co-authors to contribute. Here is the abstract:

“Quantum phenomena are typically observable at length and time scales smaller than those of our everyday experience, often involving individual particles or excitations. The past few decades have seen a revolution in the ability to structure matter at the nanoscale, and experiments at the single particle level have become commonplace. This has opened wide new avenues for exploring and harnessing quantum mechanical effects in condensed matter. These quantum phenomena, in turn, have the potential to revolutionize the way we communicate, compute and probe the nanoscale world. Here, we review developments in key areas of quantum research in light of the nanotechnologies that enable them, with a view to what the future holds. Materials and devices with nanoscale features are used for quantum metrology and sensing, as building blocks for quantum computing, and as sources and detectors for quantum communication. They enable explorations of quantum behaviour and unconventional states in nano- and opto-mechanical systems, low-dimensional systems, molecular devices, nano-plasmonics, quantum electrodynamics, scanning tunnelling microscopy, and more. This rapidly expanding intersection of nanotechnology and quantum science/technology is mutually beneficial to both fields, laying claim to some of the most exciting scientific leaps of the last decade, with more on the horizon.”

His most recent work led to the publication Self-driven oscillation in Coulomb blockaded suspended carbon nanotubes in Physical Review Research.

See other group PhD theses on our Educational Resources page.

We are seeking highly motivated students for MSc or PhD positions to start Fall 2019. Projects are available on several semiconductor nano-electronics platforms: